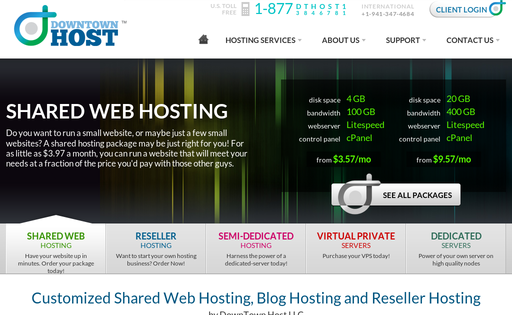 26 reviews of Downtownhost
Write Your Review

Fast & Reliable
Never had any issues with them, asia server blazing fast and fast response customer service, value for money too.

Services Period: Active customer at the time of review. Customer since February, 2013

If anything goes wrong, you're abandoned and your money lost.
I extended my subscription for 3 years, even though it was paid, they set my account to suspended out of their fault. Their tech support took so long to figure it out, they even added a "late fee", and insisted that I pay it.

Everything is fine so far
I was suggested to use Downtownhost. So far I'm with them.
What I have had during the time being with them:
- no downtime. My site have been always on for me and I have never seen any error message regarding my web site;
- good control panel

I've had so much bad experiences with companies in the past 10yrs. I am absolutely thrilled that I have found downtownhost. Never had any problems in the past 3 yrs of being with them, and their support desk is lightening fast. Great price point too!!!!

My very first host and I have never waited more than 5 minutes for online support, and get my issue resolved within 10-20 minutes everytime, they have lived up to every word and will gladly stay with them for years to come. Outstanding company!

downtownhost is just the best host i ever used and believe me, i tried many! The support responds within minutes, they are knowledgeable and friendly.

this company just succeed in ruining my online reputation! The unbelievable ineptness i have gotten from them is almost criminal. go anywhere to have your site hosted than these idiots.

Company Response: Customer account has been suspended after abuse of the server resources many times, and was canceled after being rude, abusive and insulting to our team which is a direct violation to our TOS.

DownTownHost is like a diamond in the rough. It's really hard to find a host with customer support as excellent as DownTownHost's. Not only is their support great, their uptime and server speeds are AWESOME.

DownTownHost is an oasis in the desert of hype and marketing mirages that surround us. Its like one cold, dark night you have a flat tire in the middle of nowhere without a jack when Sebastian and Jorge show up and change it for you.