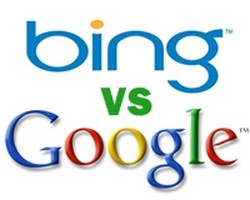 When a new phenomenon hits the web, it's often difficult to imagine life without it. Where would we share our thoughts were it not for Twitter and Facebook, where would be our first port of call for online shopping if there was no Amazon, and finally where would we search for all our 'How do I?' questions if we didn't use Google.

The old-faithful Google is unrivalled in the search engine world, and while competitors do exist, none can seem to tip the simple-paged search tool as number one in the market. However, while the popularity contest remains a one-horse race, Microsoft's Bing has tried to trump their competitors by offering a unique service within the search engine community.

Google maintains its reputation as the heavyweight that won't be toppled, but Bing's offerings may at least steal some of that market share away from the infamous brand and attract users to a different form of search engine.

The traditionally simple design of a search box and some pretty pictures are a necessity it would seem to establish a popular search engine, but it's what you receive from this simple search box that differs.

The relevance of the results from your search is surprisingly accurate, however the results often different to that of Google. By relying on different ways to rank websites it means that it is mandatory to reoptimize a site for Bing.

While their exact algorithm remains behind closed doors, experts have offered some opinions and theories behind their process. With their being such notable differences between Bing and Google, here are some of the factors which can see your website boosted on Bing.

• Original content is always a must for high rankings, so include appropriate keywords, good content and direct it toward your intended audience.

• High-quality backlinks may be an important factor in ranking determination on Google, however on Bing the top results appear to have backlines from a number of sources.

• Bing looks less at fresh content to boost your ranking than Google, meaning that sites with regular updates aren’t necessarily getting ahead in the race to the top.

• Bing appears to have a respect for authority. The Microsoft search engine seems to favor old sites of authoritative organizations, meaning age isn’t just a number. Blogs and small sites may suffer from this ranking factor.

• With the backlinks being of less importance, link spamming will follow suit and become even less effective.

• Onpage factors possibly matter more on Bing than Google, though this is a strongly contested opinion.

• While inbound links matter less for Bing, anchor test could be vital. While this doesn’t differ from Google, it will still help your ranking on Bing by having quality inbound links.

• A well-architected code in your webpage is also key enabling web browsers and crawlers to search through your page with ease.

• A sitemap will boost your rankings, making navigation around your site much easier.

• Title tags are as important as they are with any search engine, but perhaps more with Bing. So use the best keyword when creating tags and make sure there is a connection between the description and the title.

• Bing appears more flash-friendly than Google. While it has often been considered a SEO nightmare to optimize a flash site, Bing appears to be more accommodating.