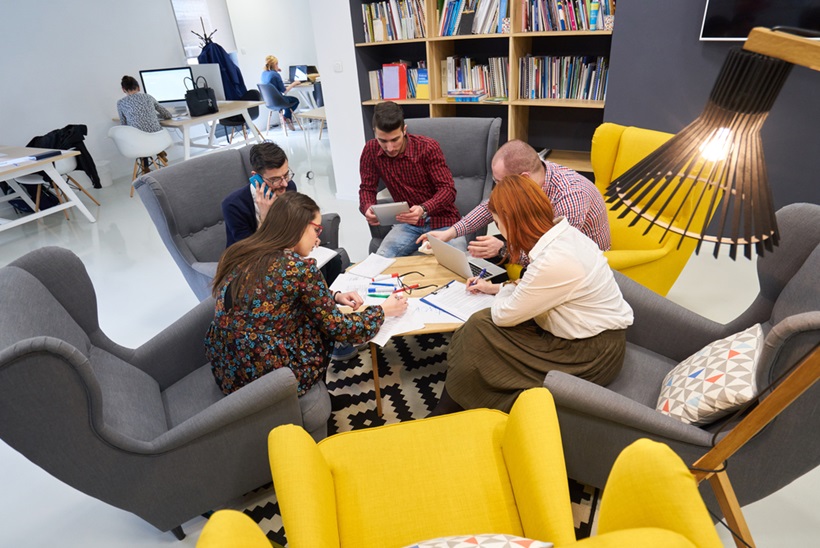 With more and more people joining the "new economy" and either becoming involved in startups or self-employed, coworking space is being viewed by many as an ideal solution to avoiding the cost of dedicated business premises. They are particularly appropriate for resellers and those starting web hosting companies.

More people than ever are involved in startups and becoming self employed. According to the Kauffman Foundation - an organization involved in "fostering economic independence by advancing education and entrepreneurship" - "32 of the 50 U.S. states last year (2015), and 18 of the nation’s top 40 metropolitan areas also saw increases in new venture activity".

So what exactly is the appeal of starting your own company?

Well, of course, when someone envisages setting up a startup, their minds focus on the endgame rather than the game itself. For many, the idea of having ‘CEO’ on the door and getting paid for fulfilling your vision (rather than someone else’s vision) is extremely appealing.

So what stops even more people getting into startups and self-employment?

Of course, this is an era of cheap money, but unless you have a friendly bank manager (or have won the lottery or been successful at crowdsourcing) money is always a hurdle, and more and more businesses are starting out with little or no funding at all.

Regardless of how much money you have access to, spending it is going to be very easy, and, as you won’t be paying very much to yourself or your team members, by far your biggest cost is going to be business premises.

Why do you need an office when you can work from home?

When the reality of startup costing hits home, the natural assumption is to work with as few costs as possible, and that means jettisoning the cost of premises, and working from a team member’s home.

Unless you are single, when you make such a decision, you are also imposing that decision on family and significant others. The living room will no longer be a place for relaxation but a place where a team of workers are working late hours and making phone calls and having meetings. Where do family members or loved ones fit in around this?

Of course, it can work out, but unless you are a one-man operation (and how many one-man operations that you know have made it big), working at home might not quite be the natural fit you thought it would be.

People don’t need to get together these days, you can work effectively as a team online

Many startups believe in teams working remotely in different physical locations that technology can bring together. So, rather than working out of a team member’s home, each team member works from his or her home.

Of course this is the modern way, and to some extent it works, but is it the right thing to do? Marissa Mayer, CEO of Yahoo thought not. In 2013 she changed Yahoo policy of one of remote working to people actually coming into the office and meeting each other.

For a startup to be successful, you need the edge of being here and now – of being able to shout an idea across the workplace rather than scheduling a Skype call to explain it. Synergy is not something that can be maximized over cable and wireless.

Alongside a new way of working in the new economy, there’s also a revolution in how people pay for things. The introduction of cloud computing has sent ripples through commerce and industry.

Before cloud computing people thought it natural to invest in their own data center capability, and that involved servers and computers – hardware and software that needed setting up, repairing, upgrading, and patching, but which might not be used all the time, and certainly might not be used to its fullest potential often.

People paid monthly for IT resources they often did not need.

This pay-as-you-use model has made people look at almost everything and reconsider how things are paid for and to what extent the cloud computing model can be applied.

As far as business premises is concerned, the result of this change in perspective has been the rise of coworking spaces.

Coworking spaces are nothing more than glorified coffee shops

Coworking spaces are not coffee shops and they are not offices in the sense that you don’t pay a monthly rent. Neither is it just renting some space in someone else’s office.

Coworking spaces are a product of the new economy and places where entrepreneurs and those involved in startups thrive.

For a start, coworking spaces have everything you need – from fax machines to copiers and printers. You don’t own them, you share them with others working within the coworking environment.

If you need somewhere private to take your clients, there are meeting rooms available with wifi, internet and teleconference facilities. With ‘scalability’ in mind, you pay only for what you use.

Of course, if you need a meeting room you pay more than the company that doesn’t – it’s just you don’t pay to have it at times when you don’t need it. This means that coworking space is more cost effective than traditional office space, and that means your startup might just survive the first stage of the race you are in.

It’s not much of a commute from your bed to your PC, so actually having somewhere to go to work helps you feel that your startup is a genuine use of your time. There’s no TV in the background to distract you either.

But what if it all falls apart?

If it all falls apart and it becomes clear your business vision is not going to be realised, then you are in a much better position with a coworking space than with a rental contract.

Whereas your average downtown office requires a contracted commitment of at least a year, coworking spaces don’t.

You can rent for a day, a week, or even a month, but seldom do people take their commitment beyond those time periods.

But you can’t run a web hosting business from a coworking space!

If you envision being a traditional web host with your own data center and masses of servers, then probably not. But coworking space can still benefit you when you are in setup mode and before you purchase all your hardware, etc.

But if you are considering the modern approach to web hosting, where companies purchase capacity in the cloud from cloud providers, then a coworking space is going to be ideal.

In a coworking space you are working in an environment with other entrepreneurs and startups present – not only can you feed off their energy, you can acquire their business.

For instance, what better place for a web hosting company than in an office full of businesses that are starting up and have “set up web presence” on their to-do list?

A coworking space full of entrepreneurs and startups must be the best place for a web host to at least start doing business until you they have the income for that shiny new office and a name on the door liked you dreamed about at the start.