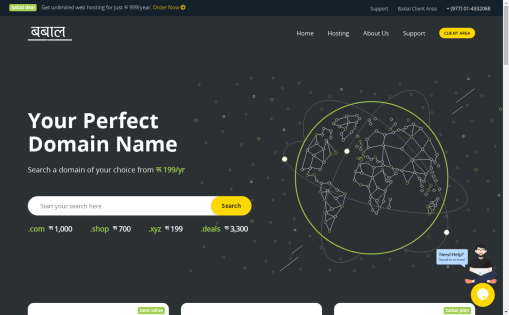 The best hosting so far
At first I had tried many web hosts, once even dabbled into free webhosts. But those weren't good. Then I started using HostMero, in a shared hosting package, doing a reverse ip lookup I found out that, that single IP had thousands of websites.

Then, I started using Google Cloud Platform, which I still do when I require private servers or multi servers. But I soon realized it was a bit expensive for hosting websites, I used to be charged about $400 a year.

After that I found about Babal.Host in Google, saw it was dirt cheap, and thought about giving it a shot. In about Rs.2854 incl. of all taxes, I got a unlimited webhosting package.

I was prepared that it was a shared hosting but out of surprise, it just hosted a couple of hundred websites on a single server! I knew that serving images and media from the same server would be slow, so I connected my WordPress site to a Google Cloud Platform Storage bucket using WP Stateless plugin and optimizing it with Rocketload Pro version.

My site was blazing fast, on the plus side, it just cost $0.035 for hosting medias per GB on Google Cloud.

Also another recommendation is to use CloudFlare Nameservers. It has the fastest DNS lookup

Services Period: Active customer at the time of review. Customer since May, 2020