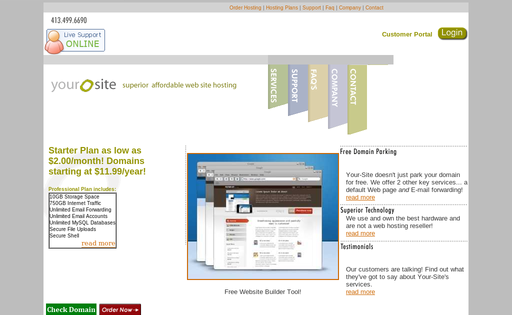 11 reviews of Your-Site
Write Your Review

Looks like one of the owners died
An update on what appears to be going on with Your-site: I just found an on-line obituary for one of the people I believe was an owner or principal of Your-site. Andrew Swett, whose name appeared on an email from them years ago, died 1/2/21 and from the way the obituary reads, may have been ill for awhile. Two others name I've associated with your-site also appear in the obituary: Danatone ("Danny") Swett, who the obituary implies is the owner, and Danatone's wife Danielle. But it lists those two as living in Florida. Even though Your-Site's address is in Funkstown, MD with other addresses for them in nearby Hagerstown, it does not appear any of them have lived anywhere near Hagerstown recently.

nobody's home
had to cancell my cc and dispute monthly harvest of annual fees! no onsite chat support, no open ticket responses other than autoemail saying you opened one.
after 19 years of service, it's come to this. go anyplace else!


Services Period: Active customer at the time of review. Customer since March, 2001

they disappeared without warning
Don't use this one—I think you can make a new account and they might even take your money if you fill out the forms, but that's about it. I was a customer with them from 2008 and they were great, then they just stopped in October. I've been reading other reviews that say they're still draining people's bank accounts. Luckily my CC expired so they're not collecting and doing no service anymore on me.

Not sure anyone is there anymore
Seriously questioning if there's anyone there anymore. May just be abandoned and it just continues to run. Currently have a billing problem which has had no response. Then decided to move to another provider and cancellation request has also been ignored. Fortunately for me, I never made them registrar for my domain so could move away and if they never cancel my account, it's no big deal (I'll just keep disputing the charges).

Customer service non-existant
Your-site used to be great, but recently they've been ignoring support tickets and not responding to telephone messages, which is quite a problem when a paying customer needs something. I'd strongly suggest going w/ another company (as I'm about to do).

Services Period: Active customer at the time of review. Customer since September, 2019

Longtime customer. Response of servers has been getting worse and worse. Email went down 6 days ago and has been up sporadically (once or twice a day we can get email - IF THAT!). Customer Service tells us, essentially, stop bothering us so we can fix

Once decent, now one of the worst in the industry. This time, POP email has been down for 5 days. Webmail seldom works. SMTP had to be rerouted. Never around. Closes trouble reports without resolution. Overcharges us and continues debits for a cancelled