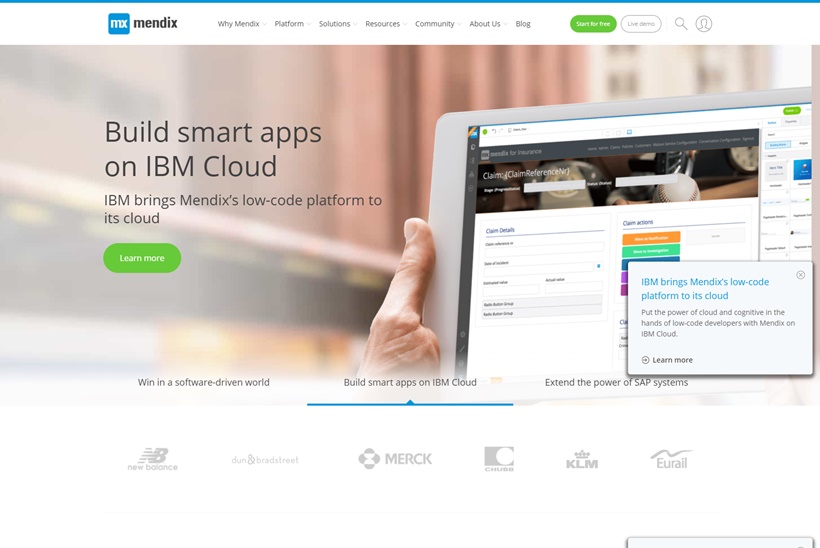 Applications development platform provider Mendix has signed a ‘Global Reseller’ agreement with cloud giant IBM. Mendix, which has global headquarters in Boston, Massachusetts, United States, was established in 2005. The company specializes in providing the “fastest and easiest platform” for the development of web and mobile applications. It caters to around 4,000 customers globally including major companies like KLM, Philips, and Royal DSM. Through the collaboration Mendix's “low-code platform” will be available on the IBM Cloud with “native integration to AI, data analytics, and IoT services”.

With Mendix's platform available through the IBM Cloud companies will experience a range of benefits. These include “accelerated time to value” with applications delivered “up to 10 times faster”. Other benefits include IBM Watson, IoT and AI services integration alongside a highly available and scalable cloud-native architecture with cloud deployment across IBM Cloud's public, private and hybrid clouds. The joint Mendix-IBM offering will be shown at IBM's THINK Conference which takes place March 19-22, 2018 in Las Vegas, Nevada, United States.

"The collaboration between IBM and Mendix will combine the ease of Mendix's low-code environment with the advanced services available on IBM Cloud, including AI, blockchain, data analytics, mobile and Internet of Things (IoT) services," explained the General Manager of Cloud Developer Services, IBM, Don Boulia. "This significantly accelerates the speed at which developers from all backgrounds, from highly skilled coders to business users expanding their roles, are positioned to build and deploy cloud-native applications."

"The apps of the future cannot be built with the tools of the past. Businesses across all industries are finding new ways to innovate, and today's leaders are putting low-code development at the core of their digital strategy," added Mendix’s CEO, Derek Roos. "Our partnership with IBM can enable enterprises to accelerate the speed at which developers from all backgrounds can build and deploy applications."

Do you know of any other companies involved in partnerships? Let us know the details. Add your comments below.