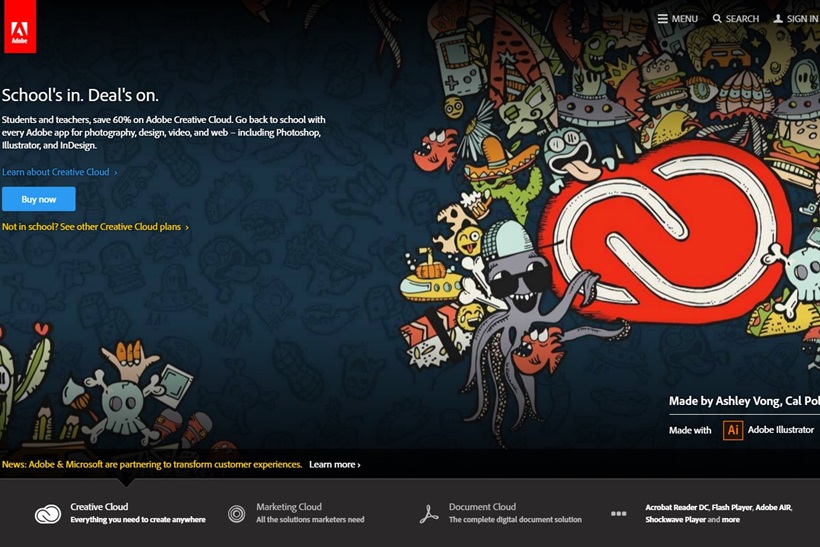 Creative Cloud provider Adobe is to leverage Microsoft’s Azure cloud. Adobe, which is traditionally recognized as a software company, is the force behind solutions like Photoshop, Lightroom, Dreamweaver and Illustrator. In 2013 the company changed its business model from one of selling software directly to customers to putting its solutions in the cloud. Initially the company only used the cloud for its subscription services but eventually use was extended to offer the compute power available through its data centers. The agreement with Microsoft will see Adobe deliver its full range of products and services via the Azure platform.

Beyond Creative Cloud services, Adobe will leverage Microsoft’s Azure platform for its Marketing Cloud and Document Cloud. Adobe’s Marketing Cloud has also become Microsoft’s primary marketing solution for customers of its Dynamics 365 Enterprise edition. However, Adobe will continue to use Amazon Web Services’ (AWS’) platform alongside Microsoft Azure and will also continue to use its own cloud capability to deliver its offerings.

Described by the CEO of Microsoft Satya Nadella as “a massive, massive milestone”, the move was also lauded by Adobe President and CEO, Shantanu Narayen. “As we thought about how we needed to evolve all of our cloud, and we thought about the next phase of innovation for this, I think it was critical to us that we had to think about things like global scale and what were we doing with global scale, or trust and compliance, but perhaps most important, machine intelligence and intelligence.”

Do you know of any other companies forming partnerships? Let us know the details. Add your comments below.