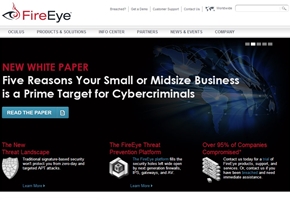 Mandiant, which has headquarters in Alexandria, Virginia and facilities in Los Angeles, San Francisco, New York, Dublin, Ireland and the United Kingdom, specializes in recognizing and managing network breaches and is famed for its report covering Chinese cyber espionage in February 2013. The report suggested that a clandestine group within the Chinese military had been responsible for data breaches at over 100 companies, each with a global reach.

FireEye, Inc. is a "global network security company that provides automated threat forensics and dynamic malware protection against advanced cyber threats, such as advanced persistent threats and spear phishing". The company saw a 24% increase in share value as a result of the deal, which was agreed 30 December, 2013, is reported to be worth $1BN.

The purchase comes after the companies became strategic alliance partners in 2012 and signed a "Technology Development Agreement" and in 2013. It is one of the largest in the cyber security industry history and occurs amongst a backdrop of concern over mass surveillance and Internet security issues.

"Organizations today are faced with knitting together a patchwork of point products and services to protect their assets from advanced threats," explained FireEye's Chief Executive David DeWalt in a statement released on the company's website. "Together, the size and global reach of FireEye and Mandiant will enable us to innovate faster, create a more comprehensive solution, and deliver it to organizations around the world at a pace that is unmatched by other security vendors."

Do you know of any other major acquisitions within the industry? Let us know the details. add your comments below.