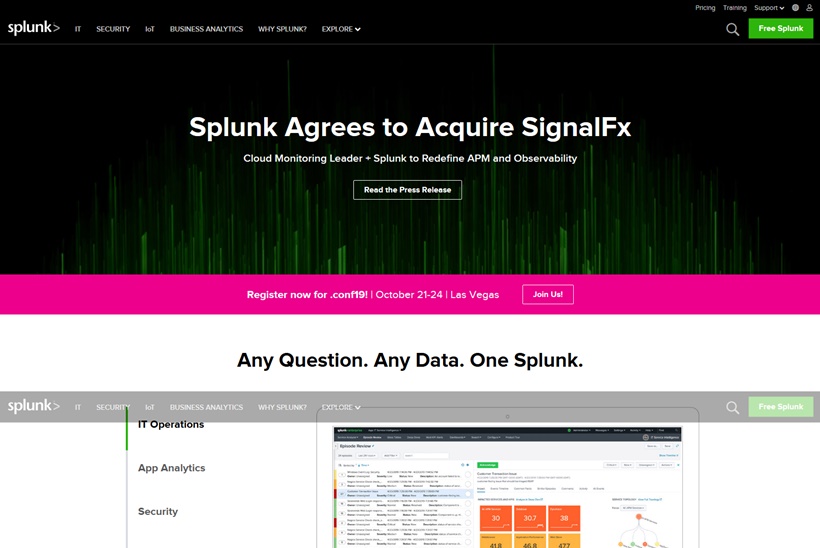 Data processing and analytics services provider Splunk Inc. (Splunk) has acquired cloud monitoring services provider SignalFx. Splunk, which has headquarters in San Francisco, California, United States, was established in 2003. The company is a “SaaS leader in real-time monitoring and metrics for cloud infrastructure” and trades on NASDAQ. Its software services allow users to leverage the machine data that is generated by “IT infrastructures, applications, mobile devices, website clickstreams, social data, sensors and more”.

Machine data is the fastest growing aspect of the big data trend and Splunk was founded to “pursue a disruptive new vision: make machine data accessible, usable and valuable to everyone”. Around 75% of Fortune 100 companies and “thousands of enterprises, universities, government agencies and service providers” have adopted Splunk’s services. Its acquisition of SignalFx reportedly cost $1.05 billion and the deal will likely be completed in the latter half of 2020.

SignalFx, which has headquarters in San Mateo, California, United States, was founded in 2013. The company specializes in many areas including predictive analytics and cloud services. It provides a cloud platform that offers real-time monitoring and analysis of data from infrastructure, applications, and microservices. Investment in SignalFx rose to $178.5 million before the acquisition. By absorbing its technology Splunk will be able to monitor all aspects of its customers' transition to the cloud and their cloud activity.

“Data fuels the modern business, and the acquisition of SignalFx squarely puts Splunk in position as a leader in monitoring and observability at massive scale,” explained Splunk President and CEO Doug Merritt in a statement on the company’s website. “SignalFx will support our continued commitment to giving customers one platform that can monitor the entire enterprise application lifecycle. We are also incredibly impressed by the SignalFx team and leadership, whose expertise and professionalism are a strong addition to the Splunk family.”

“By joining Splunk, we will create a powerful monitoring platform - one ready to support CIOs whether they have fully embraced cloud or have existing applications in the data center,” added SignalFx’s founder and CEO Karthik Rau. “As the world continues to move towards complex, cloud-first architectures, Splunk and SignalFx is the new approach needed to monitor and observe cloud-native infrastructure and applications in real time, whether via logs, metrics or tracing. The SignalFx team is thrilled to join Splunk to help CIOs capitalize upon the modern application portfolio.”