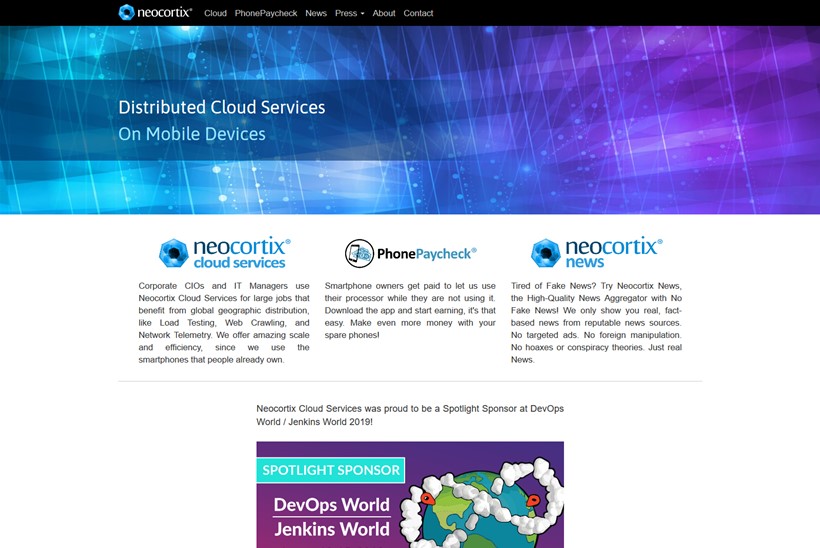 Distributed cloud computing services provider Neocortix, Inc. (Neocortix) has announced the launch of a new ‘Cloud at the Edge’ service. Neocortix, which has global headquarters in Santa Clara, California, United States, was established in 2013. The company’s services offer an alternative to the server-based cloud model by harnessing the resources available in Android mobile phones. Leveraging the ‘shared economy’, Neocortix is building a “supercomputer network out of personal cell phones”.

‘Neocortix Cloud Services’ are highly disruptive to the traditional cloud model and represent the first commercial ‘Cloud at the Edge’ service. They offer a range of benefits to those who require cloud services, including eliminating the cost of “big, expensive data centers”. They are driven by ‘PhonePaycheck’ - an Android app “that pays users for the use of their smartphone while they are not using it”. Users combine to establish a network of mobile devices that provide the resources Neocortix’s cloud services require. An Android phone owner makes $240 per-phone per-year for the use of their resources when they are not using them. As the app is encrypted phone owners’ files, personal data, photos, and social media are never compromised. To date, 42,000 devices are running the app and there are 29,000 users globally.

Do you know of any other companies offering new cloud initiatives? Let us know the details. Add your comments below.