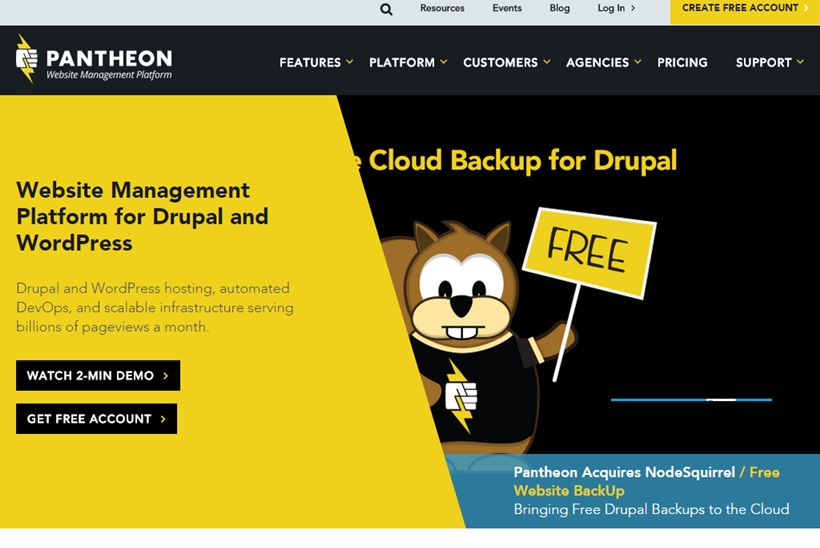 Web host Pantheon has acquired offsite Drupal backup provider NodeSquirrel. The company, which has headquarters in San Francisco, California, USA, is a Drupal and WordPress hosting specialist. Established in 2010, the company's scalable services are optimized for Drupal and WordPress websites and include features such as advanced caching, managed security and version control and workflow solutions. By its own estimates, Pantheon caters to around 100,000 Drupal and WordPress sites and its customers include Cisco and Arizona State University. Financial aspects of the deal were not released.

NodeSquirrel specializes in offering backup solutions for websites and Pantheon's acquisition will strengthen its ability to provide backups for its customers. NodeSquirrel's achievements include coding "Backup and Migrate" - an Open Source (OS) solution that enables users to establish scheduled website backups. Pantheon's customers using Backup and Migrate are now able to backup websites to its cloud platform free of charge.

"Ultimately we all decided that joining forces could yield some awesome results—such as making a free, easy to use Drupal cloud backup service for everyone," explained Zack Rosen, the co-founder and CEO of Pantheon on the company's website. "Everyone knows it’s pretty crazy not having offsite backups for your Drupal site, yet the majority of sites are probably vulnerable to data loss. Until offsite backups are frictionless and free, we think this will continue to be the case".