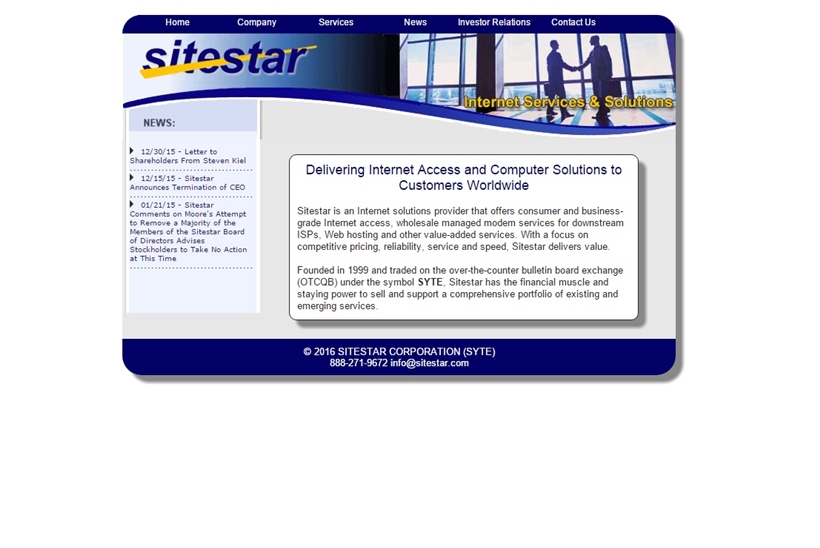 Web host and ISP Sitestar Corporation (Sitestar) has made a number of changes to its executive team. Sitestar, which has headquarters in Lynchburg, Virginia, United States, offers a range of tailored web hosting solutions that meet its customers’ exact requirements. The company’s hosting offers support for FrontPage extensions as well as PHP, Perl, Python scripting support. It also provides MySQL database and SSL encryption support alongside a range of email options and domain name registration. Mr. Jeffrey Moore has been appointed the company’s Chairman, while Christopher Payne has been appointed Director. Steven Kiel was also appointed as President and Chief Executive Officer.

News of the new appointments came in the wake of Roger Malouf’s resignation as Director and was the result of a Board Meeting held at Sitestar on February 17, 2016. Mr. Payne will join the company after managing a business valuation company in in Rochester, New York. A 15-year veteran, he has considerable experience in consulting and corporate finance. He has a Bachelor of Science in Financial Management from the University of North Carolina at Charlotte and an MBA from George Mason University.

"We thank Roger for his service to the Board and for his guidance and leadership during a difficult time for the Company," explained Mr. Moore. "We are happy to welcome Chris Payne as a Director. Chris's experience and expertise make him a perfect fit as the company transitions to the future."

The company’s former CEO, Frank Erhartic, has been investigated by Sitestar’s legal and accounting advisors. This investigation led to a demand letter being sent to Mr. Erhartic for “restitution for payments” that Sitestar believes were “inappropriately requested and received”. The investigation also highlighted a discrepancy in the number of common shares certified in filings to the Securities and Exchange Commission.

Do you know of any other companies changing their executive team? Let us know the details. Add your comments below.