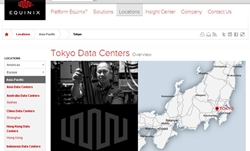 Global interconnection and data center company Equinix has developed a data center in Tokyo, Japan, to cater for increased demand for its data center services. This is the fourth International Business Exchange™ (IBX®) data center the company has built in the city and TY4, as the data center is named, represents a $43 million investment. The center was built in the Tokyo's Ōtemachi business district - a financial and the Internet Exchange hub where 4,000 large enterprises and financial firms are headquartered.

There has been significant growth in data center services in Japan over recent years, and research by the International Data Corporation (IDC) suggests Japan's data center market will grow annually at a rate of 8.6% between 2010 and 2015, generating 1.4 trillion yen (US$20 billion) in 2015. The country's colocation market will also grow 4.2% during the same period of time and generate 742.6 billion yen (US$9.26 billion) in 2015.

Data centers - do they have a future or will they all be absorbed into the cloud one day? Give us your views - add your comments below.