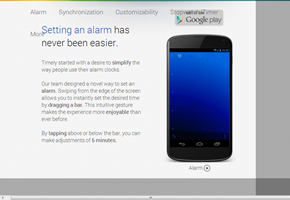 Google has acquired Zurich-based 'Timely App' developer Bitspin for an undisclosed amount. The purchase will not alter how Bitspin does business as it will continue to operate as an independent entity.

Timely App is a highly successful Android alarm clock app which saves alarm settings in the cloud so they can be used with multiple devices. Its attractive interface is noted for being highly customizable.

Beyond making an acknowledgment, Google has not commented on the acquisition. News of Google's purchase was initially announced on the Bitspin website: "We're thrilled to announce that Bitspin is joining Google, where we'll continue to do what we love: building great products that are delightful to use," the site suggested.

Do you know of any other major acquisitions taking place? Let us know the details. Add your comments below.