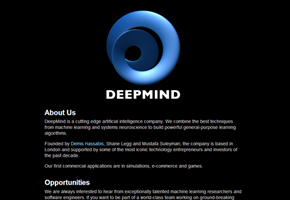 Google has bought British start-up artificial intelligence operation DeepMind Technologies for a reported $400 million - a figure the corporation is yet to confirm. Located in London, UK and founded by Demis Hassabis alongside Shane Legg and Mustafa Suleyman, the Artificial Intelligence (AI) company has received the support of some of the “most iconic technology entrepreneurs and investors of the past decade”.

According to the company’s website it specializes in “machine learning and systems neuroscience to build powerful general-purpose learning algorithms” and has to date developed a number of ecommerce and computer game applications for its technologies. Google’s purchase fits a trend of major corporations (including IBM, Yahoo! and Facebook) investing in the area of artificial intelligence. Google’s purchase comes on the heels of its recent acquisition of Boston Dynamics, a company that makes military robots.

The company is equally as well known for its founder as for its work in AI. 37-year-old Demis Hassabis is a neuroscientist and former teenage chess champion who at the age of 13 was the second-best player in the world under the age of 14. At the age of 17 he helped program the famous ‘Theme Park’ computer game. He is also a five-time winner of the Mind Sports Olympiad.

Do you know of any other major acquisitions? Let us know the details. Add your comments below.