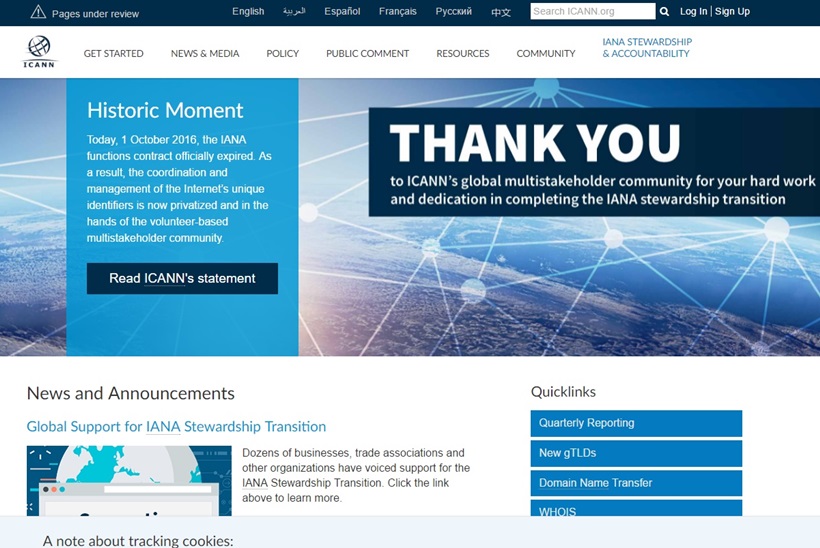 ‘Internet Corporation for Assigned Names and Numbers’ (ICANN) has taken over control of the Internet from the United States. ICANN, which has global headquarters in Los Angeles, California, United States, coordinates databases related to internet domain names to ensure the stable and secure operation of the internet. ICANN takes over from the United States’ Department of Commerce and its National Telecommunications and Information Administration (NTIA) that held a contract (Internet Assigned Numbers Authority (IANA)) to manage global domain names. The transition took place despite a number of bids to block it.

An unsuccessful bid to maintain the United States’ internet superiority was launched through a court case initiated by a number of US states. Alongside this efforts to block the transition by members of United States Congress also proved fruitless. The shift to ICANN represents a move away from governmental internet control and puts power into the hands of a non-profit organization. Internet users will not be impacted in any fashion as a result of the transition.

“This transition was envisioned 18 years ago, yet it was the tireless work of the global Internet community, which drafted the final proposal, that made this a reality,” explained Stephen D. Crocker, the Chair of ICANN’s board. “This community validated the multistakeholder model of Internet governance. It has shown that a governance model defined by the inclusion of all voices, including business, academics, technical experts, civil society, governments and many others is the best way to assure that the Internet of tomorrow remains as free, open and accessible as the Internet of today.”

What do you think about the shift of power to ICANN? Let us know your thoughts. Add your comments below.