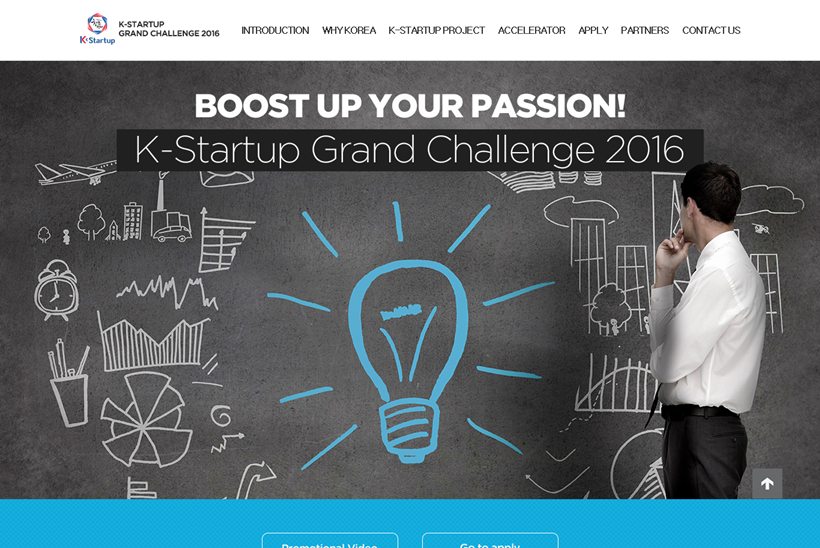 The South Korean government is aiming to attract the world’s startups through the ‘K-Startup Grand Challenge’ - a scheme that will offer 40 of the world’s best startups funding and technology support. The winners will be chosen from an initial 160 startups who will take part in online competitions and events held in major cities. This will lead to a round of pitching and interviews and the selected candidates will receive $4,100 per month for living expenses for three-man teams alongside free round-trip flights to Korea.

The winners will be located at a custom-built $160 million Startup Campus located in Pangyo, close to Korea’s capital Seoul. They will stay at the campus for three months and receive support from companies like SparkLabs, DEV Korea, Shift and ActnerLab. The campus is close to the Research and Development facilities of some of Korea’s leading technology companies.

Driven by Korea’s Ministry of Science, ICT and Future Planning, the initiative is a component of Korean President Park Geun-hye's plans to reform the Korean economy and to make Korea Asia's startup hub. Based on their time at the campus, the 20 best startups will receive “approximately $33,000 in no-strings funding”. The top four startups will receive an additional amount of between $6,000 and $100,000.

"Korea offers the best technology infrastructure in the world, combined with a population of tech-savvy early adopters who are hot on startups,” explained Korea’s Minister of Science, ICT and Future Planning, Choi Yanghee. “That, along with our central location makes us the ideal country to establish a foothold in Asia," said. "We're already home to the world's top names in consumer technology, semiconductors and gaming, and we're eager to host the next generation of high-tech companies."

Applications are currently being received and will continue to be until June 14, 2016. Those wishing to be considered should visit the scheme’s website.

Do you know of any other government schemes designed to support startups? Let us know the details. Add your comments below.