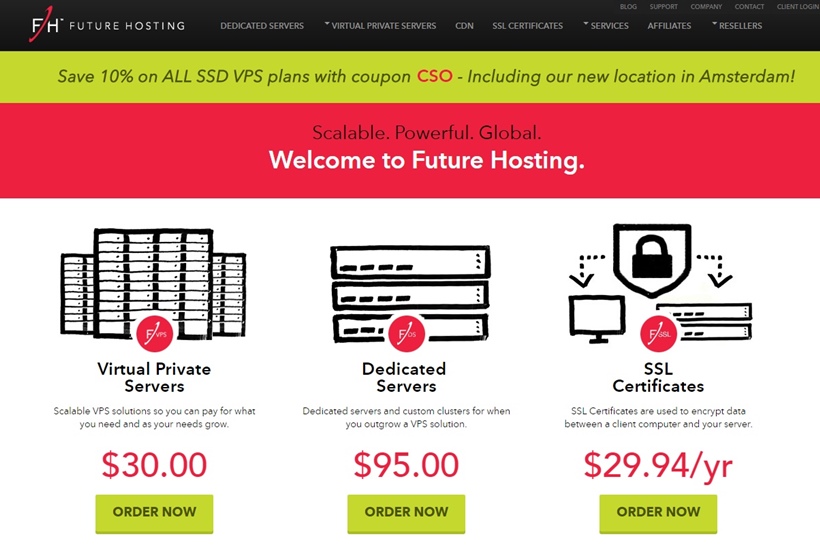 Managed hosting provider Future Hosting has announced the launch of a new promotion. Future Hosting, which has headquarters in Southfield, Michigan, United States, was established in 2001. The company offers a wide range of services which alongside traditional web hosting offerings include dedicated servers and Virtual Private Servers (VPS) options. The company prides itself on combining “highly reliable cost-effective hosting with superior customer service”. Its current promotion sees discounts of 75% for limited periods on some products and services.

Future Hosting’s promotion targets holiday shoppers and begins Friday November 25th, 2016 – also known as ‘Black Friday’. The company will reduce the price of its managed dedicated server and VPS hosting plans for the period of the holiday weekend, meaning the promotion ends midnight on ‘Cyber Monday’ - November 28, 2016. The promotion applies to new clients who will receive a 75% discount “on the first month of any managed or unmanaged Linux server plan”. Those wishing to benefit from the promotion should add the following coupon code when making a purchase through the company’s website: FH75OFF. Future Hosting also offers migration assistance to new customers as part of a hosting package.

“As the year comes to an end, it's the perfect time to build something new. Our server hosting platform provides everything developers need to build, test, and deploy websites and applications. And with our comprehensive management services, they can concentrate on their product and leave managing the server to us,” explained Future Hosting’s Vice President of Operations, Maulesh Patel. “Our Holiday Season promotion empowers new clients with everything they need, from small virtual private servers to the most powerful dedicated servers, at a massively reduced cost.”

Do you know of any other companies offering promotions over the holiday weekend? Let us know the details. Add your comments below.