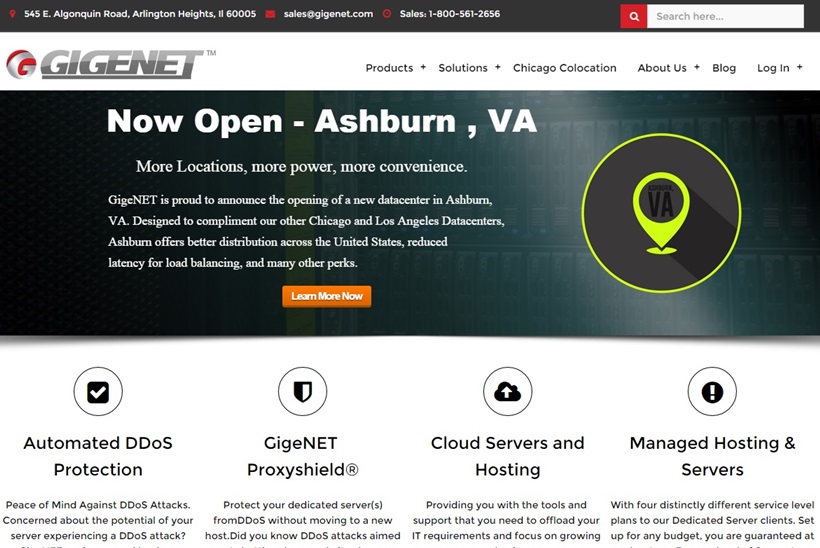 Managed hosting provider GigeNET has opened a new ISO, LEED, and Uptime Institute certified datacenter in Ashburn, Virginia, USA. The company, which offers a range of services including dedicated, cloud, hybrid, colocation hosting solutions alongside DDoS protection, has headquarters in Chicago, Illinois, USA. The opening of the company’s new facilities means it now has a data center presence in three different locations, including a center in Los Angeles and a 17,000 square foot data center in Chicago.

Ashburn is the second fastest-growing county in the United States and as such offers GigeNET a wealth of opportunities. Described as “the Silicon Valley of the East Coast”, Ashburn, Virginia is the “largest Internet peering point in North America” and a gateway to Europe. Eleven data centers managed by Equinix Inc. are located in the area and 70% of US Internet traffic is directed through the county. Being on the East Coast, it offers lower latency to Europe and greater geographical diversity for the company’s load balancing capabilities. GigeNET has added “thousands of servers and an additional location” for their cloud services to the facility.

GigeNET’s new facility enables its customers to connect to a range of transit providers including Comcast, Level 3, XO Communications, Telia, and Equinix. “One of the major benefits of opening a data center in Ashburn, Virginia is that it is one of the most concentrated locations of IP networks; it’s essentially the Silicon Valley of the East Coast and will greatly increase our peering connections,” suggested GigeNET’s President, Ameen Pishdadi.

Do you know of any other industry players opening new datacenters? Let us know the details. Add your comments below.