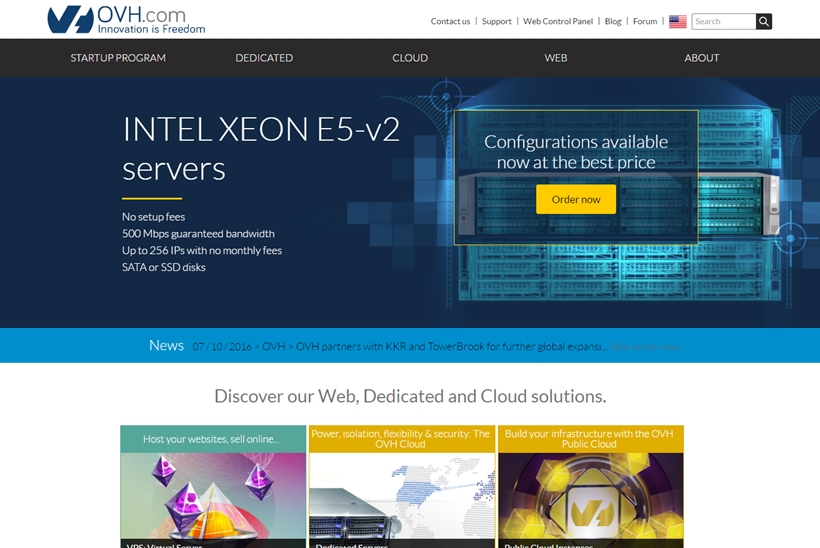 Private equity companies KKR and TowerBrook are to take a minority share in French web host OVH. With headquarters in Roubaix, France, OVH was established in 1999 and offers a range of hosting services including web hosting, domain name registration, dedicated servers and Virtual Private Server (VPS) packages and cloud-based solutions. The investment will see the company raise 250 million euros ($1.12 million). Paris, France-based BNP Paribas Corporate Finance is acting as the OVH’s financial adviser for the acquisition.

The acquisition is designed to leverage the growth in expanding cloud and cloud-based infrastructure services including Infrastructure-as-a-Service (IaaS) and Platform-as-a-Service (PaaS). It will give OVH the opportunity to extend its footprint and sell hybrid cloud products in other global locations.The company currently operates 17 data centers in France and Canada and manages 250,000 servers. Its turnover in 2016 has been €320 million ($358 million) to date.

“KKR and TowerBrook are the perfect partners for OVH as we look to take the next step in our development into a truly global technology company,” explained OVH’s CTO, Chairman and Founder Octave Klaba. “With their support, we are looking forward to scaling our company into new markets, while remaining completely committed to delivering excellence in security, service and innovation that our current customers expect.”

The acquisition has taken place against a backdrop of a recent Distributed Denial of Service (DDoS) attack which was unique in its ferocity. The attack was estimated to have driven 1.1Tbps of data towards OVH’s servers using data from some 145607 hacked CCTV cameras and DVRs. The company’s internal network security was also compromised in 2013 when a hacker accessed an email account of a member of its system administrator staff.

Do you know of any other companies that have received investment recently? Let us know he details. Add your comments below.