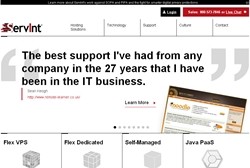 June 13, 2012 – (HOSTSEARCH.COM) – ServInt’s recently constructed European Data Center has been revealed following the Grand Opening in Amsterdam. Also known as ServInt EU, the providers of managed cloud hosting will now be taking order from the brand-new facility in the Dutch capital.

As the newest component in ServInt’s multinational network, they will now be able to provide low-latency, high-availability hosting and cloud infrastructure services through the new center, benefitting users wanting their content housed in the EMEA region.

Due to the number of pre-orders over the last two weeks, ServInt has activated EU accounts for new customers to accommodate for the orders of their hosting services out of the new data center.

COO Christian Dawson, commented on ServInt’s development outside of America. “ServInt EU is our second major expansion - after ServInt LA in California - and represents our first data center presence outside North America,” he said.

The company, which was established in Northern Virginia in 1995, will be offering a full suite of Flex VPS products due to the expansion of its services to Europe. Along with the latest developments, future releases are also reportedly in the pipeline such as all Flex Private dedicated servers, and the Jelastic Java cloud hosting platform.

Dawson concluded “Offering quality servers and support to customers around the globe is our mission, and broadening our footprint to include servers based in Europe is an important step toward achieving that goal.”