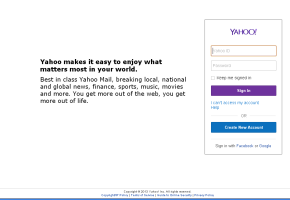 Yahoo Mail, Yahoo!’s web-based / cloud-based free email service, is still experiencing problems, a number of reports have suggested. Problems with the service began Monday 9 December 2013 and despite the company’s efforts, some users have not been able to use the service since then. According to the President and CEO of Yahoo! Marissa Mayer the issues the service is experiencing are “complex” in nature.

According to the company, its current email difficulties can be traced to a storage system hardware problem which impacted “1 percent” of Yahoo Mail users. Ms. Mayer suggested that the issue impacting Yahoo Mail was a “particularly rare one” which had affected accounts in a variety of ways. However, the company’s website currently suggests that “99.9 percent” of users are able access their accounts and all affected customers have received a notifications informing them of the issues.

Did Yahoo!’s email problems impact you? Let us know what happened. Leave your comments below.