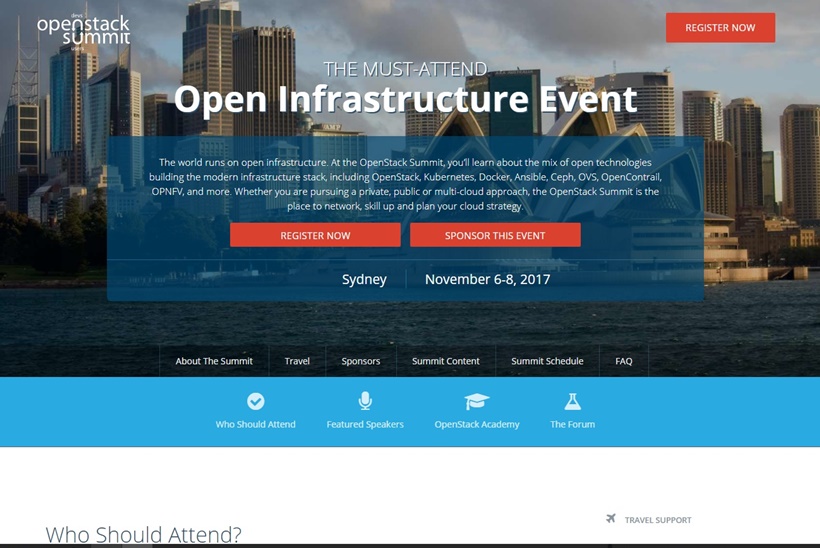 It has been announced that Sydney, Australia is to host a major ‘Open Source cloud computing summit’ - the OpenStack Summit. The event, which will be held at the Sydney Convention and Exhibition Center November 6-8, 2017, will be attended by delegates from 50 countries, who will consider the future of Open Source cloud computing. This is the first time the event has been held in the country.

The OpenStack Summit is held twice a year and previous venues have included cities like Paris, Tokyo, Vancouver, San Francisco and Barcelona. The Sydney summit will be attended by major players like Sprint and Tencent/WeChat, who will “talk about multi-cloud strategies, cost savings and increasing agility with OpenStack”. It will also be attended by companies like American Airlines, China Railway, and Saudi Telecom. Government bodies will also be represented including the US government’s ‘Defense Advanced Research Projects Agency’ (DARPA).

Sponsors of the event will include “APAC's leading Cloud Provider”, Aptira, and global players like Cisco, Huawei, IBM, Intel, Mirantis, Red Hat and VMware. Those interested in sponsorship should visit the event’s website. The summit will also cover “strong OpenStack adoption among financial services, telecoms and research organizations”. ‘Early Bird Registration’ with discount prices is available until September 8, 2017.

“Enterprises and service providers in Australia were among the earliest adopters of OpenStack, so it’s exciting to bring the Summit and thousands of community members globally to Sydney,” explained the OpenStack Foundation’s Executive Director Jonathan Bryce. “The rapid growth of OpenStack—in excess of 40 percent year over year—means there’s lots to talk about at the Summit in terms of compelling new use cases, instructive new user stories and proven best practices for both developers and cloud operators.”

Do you know of any industry events coming soon? Let us know the details. Add your comments below.