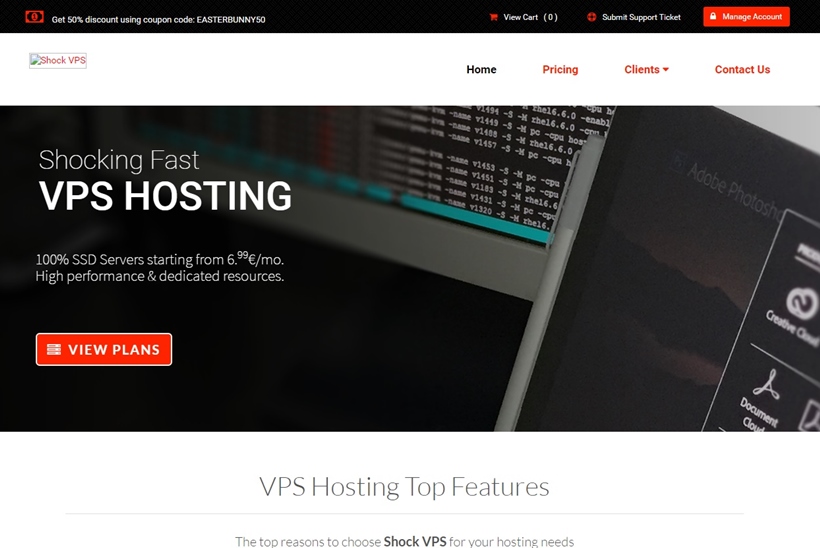 SSD drives, which have no moving parts, are faster than the “spinning disk” type of disks utilized by servers in traditional hosting services. As a result, page loading times are considerably faster and websites are hosted in a more reliable infrastructure. While ShockVPS offers “high performance” servers with “dedicated resources”, the company’s hosting options start at only €6.99 ($6.75) per month. The basic package includes 1 Core, 1GB Ram, 15GB SSD, 3TB Bandwidth. A larger package is available offering 3 Core, 4GB Ram, 50GB SSD, 5TB Bandwidth for only €24.99 ($28) per month.

ShockVPS prides itself on offering extra services that other companies charge for and which are included in a single package. Its services are underpinned by ongoing technical and customer support and a 100% uptime guarantee alongside dedicated server resources. The benefits of fast loading speeds include a satisfactory customer experience as well as improved SEO - Google prefers websites with fast loading times.

“We use only KVM technology for virtualization which provides guaranteed/dedicated hardware on the virtual machines,” explained a ShockVPS spokesperson. “We have low latency nodes all around Europe. Also, all our servers have 100% SSD storage. Our main goal is to provide Shocking Fast VPS Hosting - fast servers and fast network.”

Do you know of any other companies offering new VPS options? Let us know the details. Add your comments below.