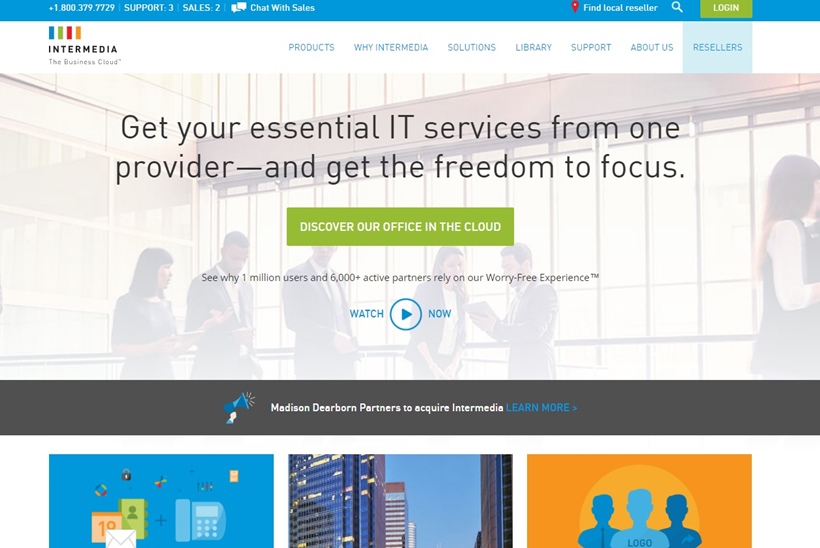 Cloud business applications provider Intermedia has been acquired by private equity firm Madison Dearborn Partners, LLC (MDP). Intermedia, which was established in 1995, has headquarters in Mountain View, California, United States. The company bills itself as a “one-stop shop for cloud business applications” and is “the world’s largest independent provider of cloud Microsoft® Exchange email”. It also offers ‘Our Office in the Cloud’, a proprietary suite that brings together email, voice, file syncing and sharing, conferencing, instant messaging, identity and access management, mobility, security and archiving. With 700 employees, Intermedia caters to over 1,000,000 users in more than 75,000 businesses. MDP acquired Intermedia from its previous shareholders led by American private equity firm Oak Hill Capital Partners.

MDP, which has headquarters in Chicago, Illinois, United States, specializes in investing in a range of industries (including telecom, media, technology, financial and government services and health care) and targets companies with “outstanding management teams” to achieve “significant long-term appreciation in equity value”. Established in 1992, the company has raised funds worth approximately $23 billion and completed around 130 investments. Intermedia has become its seventh fund. Intermedia’s CEO Michael Gold will remain in his position post acquisition.

“We are proud of the transformation and growth of the company. We now have an annualized revenue run-rate of over $200 million, 75,000 customers, 6,000 active partners and 700 employees around the globe,” explained Intermedia’s Executive Chairman, Phil Koen. “Over the past five years, we’ve more than tripled our revenues, EBITDA, users and product offerings,” added Michael Gold. “We’ve also experienced dramatic growth of our customer and partner base. Along the way, we’ve built a rock-solid management team to take the company forward, including recent CFO and SVP of Worldwide Sales appointments from Dropbox and Microsoft, respectively. We are well set for even bigger things to come in partnership with MDP.”

Do you know of any other industry players that have been acquired? Let us know the details. Add your comments below.

Back to Intermedia news