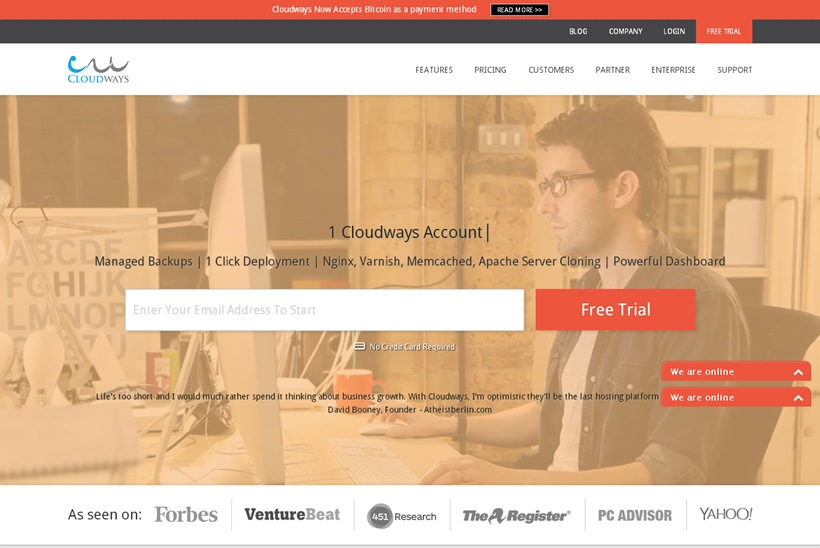 Managed cloud hosting company Cloudways now accepts Bitcoin payments for all of its hosting services. The company, which has headquarters in Mosta on the island of Malta, was established in 2012. It caters to over 1,500 customers with a range of managed cloud hosting services that utilize DigitalOcean, Amazon Web Services (AWS) and Google Compute Engine infrastructure. The company’s services are underpinned by server load balancing technology that enable websites to “load on average 100% faster” and which supports solutions such as Joomla, Wordpress and Drupal. The move towards Bitcoin adds Cloudways to a long list of providers who now accept the cryptocurrency.

Bitcoin leverages the Open Source (OS) peer-to-peer Internet protocol to offer payment services. It has become the most widely used and most recognizable of the cryptocurrencies currently in circulation. It now rests alongside American Express, PayPal, VISA and MasterCard as methods of payment for Cloudways’ managed services.

“Cloudways have always believed in innovation and bringing the best to the cloud hosting community,” explained the co-founder of Cloudways, Pere Hospital. ”We are proud to introduce Bitcoin as one of our payment options. We, here at Cloudways, always strive on being the people’s favorite and it is hard to deny the popularity that Bitcoin, a ‘free and open’ currency model, has been able to garner so far. This is what makes this integration a perfect fit for Cloudways and Bitcoin.”

Do you know of any other providers that are switching to Bitcoin payments? Let us know the details. Add your comments below.

Back to Cloudways news