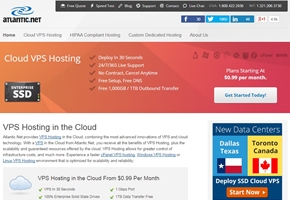 Web host Atlantic.Net has announced the launch of a new $.99 server "Go" plan. The company, which specializes in SSD cloud VPS hosting solutions, has introduced the plan as a means of stimulating "startup innovation".

Atlantic.Net offers HIPAA and SSAE 16 (SOC 1) TYPE II compliant services through its own data center. Its services include hybrid hosting, private virtualization, and VPS cloud hosting, each underpinned by a 100% uptime Service-level Agreement (SLA). The company's new plan is a bid to enable "early-stage and bootstrapped startups, along with indie developers" to grow their businesses and use the cloud to establish the "next big thing" in business. It removes the cost barriers that impede would be developers from learning to code and creating apps.

Despite the pricing, the new server offers substantial resources, with 256MB Linux or FreeBSD Cloud Virtual Private Server (VPS) alongside 10GB of SSD storage. The plan also offers 1TB of outbound bandwidth as well as unlimited inbound bandwidth. The server plan does not require an extended commitment and provides "per second" usage billing. Other features include additional IPs, backup, DNS, SSH keys, multiple server locations, and Infiniband networking. Existing servers can be resized when a developer requires additional capacity.

"When we started our business, the concept of the Internet was largely a dream. Similarly, we want to inspire developers to tinker, toy, and imagine the next big thing," explained Atlantic.Net's CEO and Founder, Marty Puranik. “We want to invest in our customers to help them get going with their ideas while at the same time growing the cloud market ten times and making this a global phenomenon".