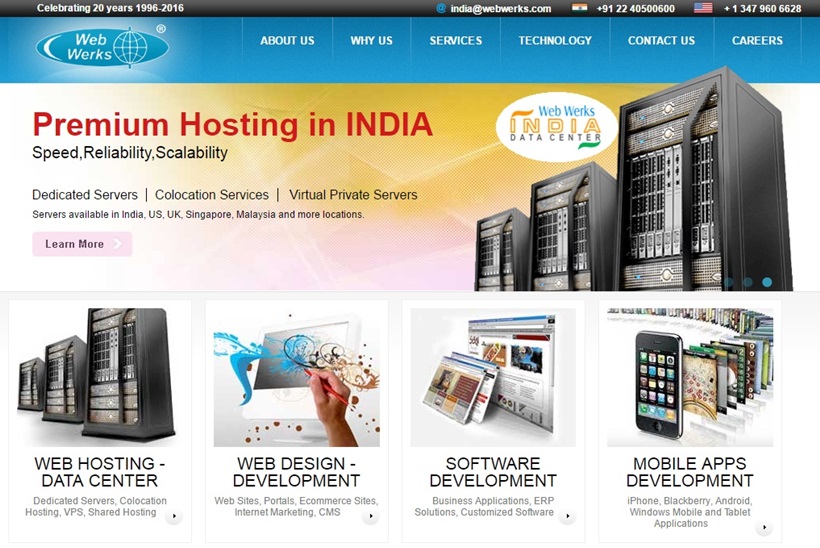 Web host Web Werks has announced the launch of an initiative which aims to facilitate an “affordable and improved Internet experience” in India. Web Werks, which was established in 1998, has headquarters in Mumbai, India. The company provides a range of hosting products and services alongside domain name registration. It operates “carrier neutral” data centers, including Tier III and Tier IV data centers in the United States. Its services extend to the cloud and VPS hosting, dedicated servers and collocation, and the company caters to around 5,000 customers worldwide. Web Werks’ CSR initiative ‘InternetFirst’ is a platform through which company will “take steps to understand, plan and enhance the Internet and related issues in India”.

InternetFirst will support the Indian government’s ‘Digital India’ program and meet a number of objectives. The company aims to help new internet entrepreneurs by bringing together and training “10,000 entrepreneurs and startups”. It will also benefit ISPs and content providers through the provision of “affordable internet services”. Alongside informing people about IT trends and technologies, the initiative will promote the ‘.in’ and ‘.bharat’ infrastructures and also promote “regional language” through the internet. The overriding goal of InternetFirst is to increase the number of internet users by 30 million by next year and create 100 million new internet users over the next 3 years.

“Internet has touched the lives of people in so many ways that it would not be wrong to say that it has completely transformed the way of living globally,” explained a Web Werks spokesperson. “Internet and IT industry is growing at a very fast speed. India is the country with 3rd highest number of internet users in the world and it’s the 2nd largest market for social media giant like Facebook. With the advent and popularization of Flipkart, Amazon, OLX, Quikr etc., online shopping and eCommerce has now reached even to the hinterlands of the nation. But, Internet in India is yet an expensive commodity here and the speed is too slow when compared to many other nations. This initiative of Web Werks InternetFirst has been launched to improve the accessibility as well as affordability of internet in the country.”

Do you know of any other companies that are helping entrepreneurs and growing internet users? Let us know the details. Add your comments below.