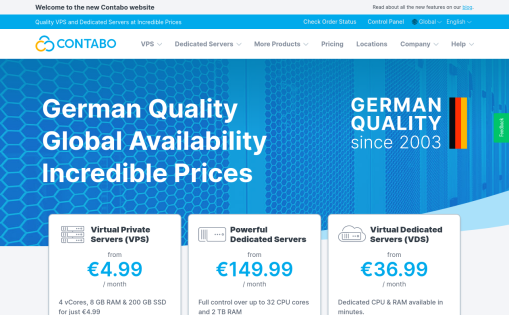 110 reviews of Contabo
Write Your Review

contabo - no service
the service from contabo is incredibly bad. my server was offline for 1 week.

Services Period: Active customer at the time of review. Customer since January, 2022

Update on previous review.
I had earlier posted a review about contabo. This is a follow-up review.

I was contacted by the Customer Support team. Explained to me that it was a misinterpretation and my issue has been resolved. I feel confident that someone is listening.

Services Period: Active customer at the time of review. Customer since March, 2022

Daylight Robbery
Do not host your public sites on Contabo server, they have the worst TTBF ever in the market. They also have weird policies. I paid for a year, cancelled on their dashboard within 14 days, waited 8-10 days for refund, but did not receive a refund. Upon reaching out to customer care, they said their policy states that just cancellation is not enough, the customer has to send them a refund request in a prescribed format either via a mailed letter, a fax, or email. C'mon, which year are they living in?

Anyhow I lost the money 1 year subscription money. They lost a customer forever. I still have my ERP instance running on contabo. I am waiting for the contract period to end to switch back to GCP.

Here is the story about TTBF.

On recommendation from an ERP consultant, we moved our ERP from Google Cloud VM to a Contabo server. Everything seemed fine. But few of our employees complained that the ERP has become a bit slower. I dint give it much concern.

Later that month, we decided to move our public wordpress site to contabo's server. Our website have a very minimum traffic, approximately 1000 to 2000 vistors per month. But the website was loading very slow. When we checked the GTMetrix it showed that TTBF was above 3500 ms. Originally our total load time used to be only 280 ms. To make sure it is not an issue with our theme and plugins, we tried a plain installation of wordpress on contabo, digital ocean and google cloud. All on their chepest servers. Digital ocean and google cloud servers selected for testing was on a fraction of the specification of contabo servers. We discovered that there was some real issues with Contabo server, because DO and Google Cloud was delivering TTBF below 80 ms. I read online and found that this was a common issue with Contabo and they were also throttling disk IO. It was hardly 5 to 7 days since we purchased the server and I had read that they had a 14 days refund policy. We had paid for an entire year. We immediately cancelled

Services Period: Active customer at the time of review. Customer since March, 2022

Didn't get a full refund! Terrible customer service and expensive.
Don't even try them, because any mistake you do on your order will cost you, and you will not get a full refund! After my order I wanted to set up my vps via the Remote Desktop App...but as I was informed later only, that my order didn't include access via RDA.. ok, no biggy, right ? you can ask for a refund for a service you never even received and only ordered a few hours ago..?? WRONG! You get only 50% back! why? because there is a set up fee! Now, they will say that you are informed that there's this setup fee etc.. but come on! who reads those tiny letters, and why on earth can't you be like all other service providers??!! Just be fair and honest and give back money that was accidently paid! I had other vps services that when I had problems, gave back immediately full refunds! Don't waste your time and money on Contabo.com, there other vps that are CHEAPER, with much better customer service! I'm sorry for you, contabo.com, with your customer service stuck in an old, dark century!

CONTABO UPDATE - Review
Since my last Review, some things have changed to positive, which makes me feel obliged not only to complain, but also to leave an update.

I removed all of my clients' VPS's to another company due to the above problem explained, but I kept a VPS to see if the problems persisted or improved. It's been a while and the problem seems to be resolved. For privacy reasons, I cannot reveal the content that caused the problem, but the Contabo team solved the problem, which I understand is not 100% their fault, but I cannot disclose it.

Obviously the situation has caused damage to the clients I represent and although everything is fine now, I believe that the same clients are well served in the new company as well.

Regarding potential new customers, I will gradually propose to use Contabo services gradually in the future.

I want to thank the A.K of Customer support, who tried to solve everything in the best way. (I just put the initials of the name, for reasons of privacy of that member of the Contabo team)

Services Period: Active customer at the time of review. Customer since January, 2019

This Company was good before, not anymore.
This Company was good before, not anymore.
Have many other companies doing the same, If you come here because the price...Go away, because probably will stay more cheap if you pay a little more in other company. Totally disappointed with this company, also its not clear how they handle the Data of the clients, like the ID cards, Passports, Address documents, etc. (Data protection under GDPR), if they have legal authority to collect our personal data and how they stored in EU or USA and if they have he Data Protection Officer (DPO) to handle legally our data. MY ADVICE STAY AWAY FROM THIS COMPANY

If you pay for VPS and they don't let you login to the dashboard is normal, you are burning your money for don't use the VPS

Services Period: Active customer at the time of review. Customer since January, 2020

Are all these bad reviews fake?
I don't usually review services but Contabo is getting a bum rap here. I have 8 VPS and 2 dedicated servers and I have not experienced bottlenecking on my bandwidth, CPU usage, or any component. I can't speak to their policies concerning DCMA, but honestly that matters little to me. I've also contacted support multiple times and have always been answered very quickly and competently.

Services Period: Active customer at the time of review. Customer since July, 2020

Contabo Scam - Suspend ur VPS and Request Money to Reactivate
I have signup and paid for Contabo VPS 4GB Memory/200GB SSD package. After almost two week, I cannot access my server either via Putty, WinSCP or browser.
I check my email, they said that they suspend my server because of misuse however I only just install LAMP and Apache Tomcat on that VPS. Nothing more.
They request $40 for reactivate the VPS.

I check the email, there is a SPAM email from contabo that mention that there is abuse/misuse from my VPS and it will suspend my VPS.

I don't know what abuse can be made by a clean install of LAMP and Tomcat with no page,system or website to deploy. i'm glad that I only subscribe for 1 month and does not migrate my site and data to Contabo yet..

For thos who plan to use Contabo, please beware..

Company Response: Hello, sorry to read about your dissatisfaction, as I can see, we managed to resolve the issue to together with you after all and to your satisfaction. Glad you are still with us after all, wishing you all the best! /Markus

Services Period: Active customer at the time of review. Customer since June, 2021

You get what you pay for (DDoS Protection is a lie)
I had a server for 2 weeks at Contabo an chose their service for their promise of 99% DDoS mitigation.
That's not true. I became a DDoS victim by a unknown source and the only thing Contabo did was disable my IP.
After three days Contabo shut down my server forever and I paid for three months and I won't get a refund because of the DDoS.

Their promise of 99% DDoS mitigation is a lie and you should not trust it when you order a server.
You will lose your money and your server when DDoSed.

Services Period: Active customer at the time of review. Customer since April, 2021

Services Period: Active customer at the time of review. Customer since April, 2015